A Basic Principle of Action Behind Psychedelics? ‘This connection, it’s just a lovely feeling… this sense of connectedness, we are all interconnected.’1

– Depressed patient after experiencing a therapeutic dose of psilocybin.

In the ever-accelerating world in which we live, many people feel increasingly lost and left behind. Despite omnipresent social media, rates of anxiety and depression have been rising for years.2 As a potential antidote against this loss of connection to oneself and others, psychedelics are experiencing a renaissance in science and medicine:3,4 They can provide an opportunity to identify misguided life decisions and weave new, meaningful patterns into our social webs.5

Just how are psychedelic substances able to do this? In the following paragraphs, I will argue that an underlying principle of psychedelics is connection – or even reconnection. This reconnection works on different levels: the biological, the psychological, the societal, and the ecological.

Let’s do a little magic trick. Please adopt a relaxed, comfortable position and do the following:

Think about your favorite food. Imagine the texture, the different flavors, the colors, the smell. Try to completely dwell in the delicious experience this food provides you with.

Pretty cool trick, isn’t it? Your brain created a kind of virtual reality without the need for special goggles! This virtual reality, the food you were thinking about ten seconds ago, is generated by neurons in the brain connecting with each other. With this example in mind, let’s take a look at how considering the ‘wiring’ of neurons can help us understand depression.

Depression is associated with a change in neuronal connectivity, among other things, in brain areas belonging to what neuroscientists call the default mode network (DMN).6 This network – as the name suggests – is active in our default mode: when we daydream, think about ourselves, or let our minds wander. On the other hand, when we are engaged in a task that requires focusing on a specific external stimulus, the DMN’s activity is dampened and other brain areas become more active. It is this fluidity in functional connectivity that makes for a healthy mind.

In depressed patients, however, fluidity is reduced to rigidity. Cognition shifts dramatically towards constant negative thinking patterns, particularly about oneself.7 Likewise, trying to imagine anything pleasant – like one’s favorite food – becomes difficult when cognition is stuck in such a negative loop.

Fascinatingly, psychedelics are able to loosen the rigidity within the DMN and allow brain regions to reconnect with each other in a way that resembles a healthy dynamic.8,9 In fact, psychedelic compounds seem to selectively increase neuronal connectivity at the molecular level.10 This means that they may be able to reconnect neuronal pathways that have been lost during a long period of depression.11 One can see how this effect on neuronal connectivity translates to increased well-being by looking at…

In one of their publications, the research team headed by Dr. Robin Carhart-Harris roughly defined the ego as “a sensation of possessing an immutable identity or personality; most simply, the ego is our ‘sense of self'”.12 For each of us, the sense of self encapsulates a range of mental processes: the feeling of having a body, remembering past experiences, feeling emotions, or planning the future. Having an ego associated with these mental processes is usually not a problem. But disorders like depression arise when the ego takes the wheel on the highway of cognitive life, steering towards negative cognition at every opportunity. This illusory and false identification of (negative) thoughts with the sense of self is like mistakenly identifying a picture of an object with the object itself, as beautifully illustrated by René Magritte’s famous painting “The Treachery of Images”: 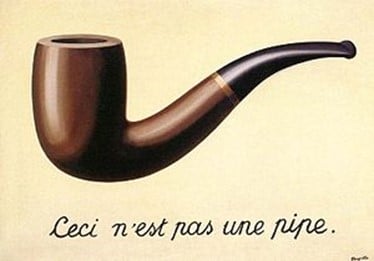 Figure 1: The Treachery of Images by René Magritte, 1929.

To put it simply: Just as there is no pipe in the picture, there is no self or ego in a thought.

What that means is that our sense of self is associated with the activity in a functional neuronal network (i.e. the DMN), held together by alpha band activity (8-13 Hz) and forming a well-orchestrated pattern (synchronous oscillatory activity). As explained above, a depressed brain is partly characterized by a too tightly-bound DMN that translates into the psychological burden these patients carry. In other words, depressed patients suffer from an ego that is too dominant. What happens, then, if psychedelics temporarily cut the threads that hold the ego together? A depressed patient who underwent a psilocybin-assisted psychotherapy session gives the answer:

“This connection, it’s just a lovely feeling… this sense of connectedness, we are all interconnected.” (male, aged 52).1

As a possible explanation for this increased feeling of connectedness, psychedelics seem to bring the brain into a state of higher entropy, defined as an increase in possible connections between regions. They seem to induce a collapse of the usual pattern of activity within the DMN, and thereby the subjectively experienced ego (see Figure 2).12,13 One consequence of this seems to be a greater feeling of connection with the environment. This environment could be other people (society) or the surrounding nature (ecology). 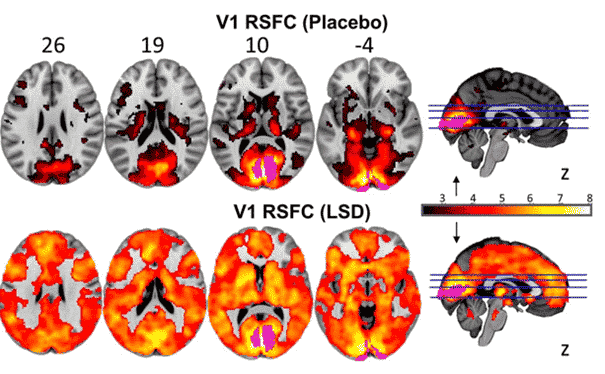 Timothy Leary’s quote “turn on, tune in, drop out” was the famous triad of the 1960’s psychedelic counter-culture that led many people into the novel realm of the psychedelic experience. While the statement’s political implications are controversial, recent research illuminates why it may have been so appealing in combination with psychedelics. Recent psychological research has now shown that LSD changes social cognition by enhancing  openness, trust, empathy, prosocial behavior, the desire to be with other people, and perceived closeness to others.15,16 Thus, it is not surprising that people who shared this previously unknown, deeply changed perception of themselves with others also engaged in discussions about how a new, better society  might be established.

The tragedy was that the discovery of LSD was only 30 years old, and psychedelic rituals didn’t come with a harm reduction manual. The promised liberating effect on the mind was so alluring that many people took psychedelics in an irresponsible manner, which led to the political denunciation of psychedelic compounds by the administration of Richard Nixon.17 How that ended is well-documented: Scientific investigation into the medical applications of psychedelics was shut down for several decades.18,19

Now, there are signs that the use of psychedelics in medical and recreational settings is slowly being decriminalized in the United States.20,21 We should not miss the opportunity to discuss how to implement these tools for personal and societal development in our culture before the wave of decriminalization reaches Europe. This way, we can try to avoid the lack of harm reduction that hampered the responsible integration of psychedelics into society in previous generations. Perhaps even more importantly, the safe introduction of the psychedelic experience into society will allow us to reconnect to…

How are psychedelics and ecological concern connected? Some believe that psychedelic compounds might increase connectedness to nature by dissolving ego boundaries, resulting in the inclusion of nature in self-identification.22 This effect is described in the following patient report:

“Before [the psychedelic experience] I enjoyed nature, now I feel part of it. Before I was looking at it as a thing, like TV or a painting. [But] you’re part of it, there’s no separation or distinction, you are it.”23

Evidence is growing for the theory that psychedelics increase connectedness to nature. In a small study involving patients with treatment-resistant depression, nature-relatedness and authoritarianism were shown to be increased and decreased, respectively, lasting for up to 12 months after psilocybin administration.24 Additionally, in a large-scale general population online study, participants reported that their use of psychedelics increased their self-identification with nature, which was in turn associated with pro-environmental behavior.25 Furthermore, another survey study found that related attitudes and beliefs, like the personality trait of “openness” and liberal political views, were positively associated with the ingestion of psychedelics, although the magnitude of this effect should not be overestimated.26

It is a matter of ongoing discussion whether the relationship between nature-relatedness and psychedelics is causal or correlational. However, preliminary findings indicate that in addition to the positive effects on healthy individuals, exposure to nature within depression treatment might significantly increase the success rate. A thorough and more in-depth review about psychedelics and nature relatedness can be found elsewhere.27

In the increasing number of studies on psychedelics from the last two decades, connection is a recurring theme. Psychedelics facilitate new connections between neurons, which translates into higher connectivity between certain regions in the brain. This effect might represent the core of psychedelics’ antidepressant effects, and potentially their general therapeutic potential.

In Aldous Huxley‘s novel Island, a utopian society builds its ecological beliefs on using psychedelic mushrooms. Likewise, the meaningful and ethically informed use of psychedelics could help people reconnect to their social and ecological environments. If we continue to carefully and critically examine the scientific advances and legislative changes regarding psychedelics, we can edge closer to the vision of the MIND Foundation: to build a healthier, more connected world.