A Match Made in the Mind 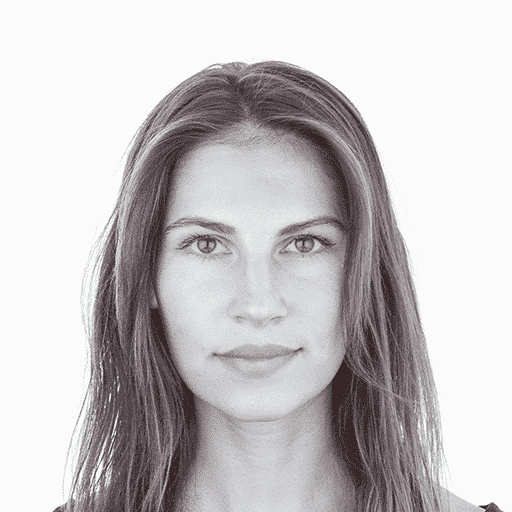 Selina's doctoral research investigates the synergy between meditation and psychedelics.

The mind is the friend
Of those who have control over it,
And the mind acts like an enemy
For those who do not control it.

After being deprived of the scientific community’s attention for decades, psychedelic research is now experiencing a revival. Specifically, there has been an increase in studies on the therapeutic potential of psychedelic substances for treating mental disorders such as depression, addiction, cancer-related psychiatric distress, and obsessive-compulsive disorder.1 But with the usefulness of psychedelics revealed, this research field is now faced with the next important questions. We know that psychedelic-assisted therapy can reduce symptoms, but how can patients sustain these improvements long term? And are there adjunct practices or therapies that enhance the efficacy of psychedelic-assisted therapy?

Mindfulness practice provides one possible answer to these questions. The term “mindfulness” has a rich history, originating from various Asian contemplative traditions. The concept was introduced into Western clinical psychotherapy in the 1980s by Jon Kabat-Zinn, who was influenced by Buddhism and developed a program called “Mindfulness Based Stress Reduction” (MBSR).2 In MBSR, mindfulness is defined as “moment-to-moment non-judgmental awareness”. It is understood as a quality that can be practiced, for example by means of meditation.3 Without getting into the debate of whether the definition of mindfulness employed by many Western researchers covers the complexity of the concept sufficiently, I will make a case for using mindfulness practice in psychedelic-assisted therapy.

The combination is greater than the sum of its parts

Despite a lack of empirical research on the usefulness of combining mindfulness practice and psychedelic-assisted therapy, several researchers have suggested possible synergistic effects.4–6 In depressed patients, both mindfulness meditation and psilocybin have been found to influence certain psychological and biological factors associated with depression.(5) One cardinal symptom of depression is a depressed mood, which is typically sustained by negative thinking patterns, rumination, and inadequate emotion regulation. Both mindfulness and psilocybin can improve depressed mood in complementary ways. Meditation works through promoting emotional acceptance, hence changing the way people perceive and cope with their thoughts. Psilocybin, on the other hand, may alter those thoughts directly: it is thought to destabilize established negative belief systems and induce blissful peak experiences.7 Peak experiences are frequently characterized by a sense of connectedness, sacredness, and feelings of bliss, and they often come with lasting psycho-spiritual insights.

Mindfulness and psilocybin may also target neurobiological factors associated with depression. In depressed patients, neuroplasticity – the neural mechanism through which the brain structurally and functionally adapts to changes in a person’s environment – is often impaired. Neuroplasticity is strongly associated with a protein called brain-derived neurotrophic factor (BDNF), which is often abnormally low in depressed patients. Prolonged, repeated mindfulness practice seems to increase levels of BDNF, thus promoting neuroplasticity.

Psychedelics, too, induce transient but powerful “neuroplastic boosts”, dramatically increasing BDNF levels even after a single session.5 Animal studies also show increases in neuroplasticity at the cellular level in the brain: When researchers administered adult rats various psychedelic compounds, including LSD, psilocin, and DMT, they observed significant increases in the dendritic spine density accompanied by an increased number of synapses. In other words, within 24 hours psychedelics caused the rats’ neurons to form more connections with each other. This structural change was also accompanied by functional changes in brain activity.8

What can we take from these findings? Mindfulness meditation and psilocybin both act on some of the major psychological and biological factors contributing to depression. However, they act differently and over a different time course, thus potentially complementing each other and working in synergy.

A recent double-blind placebo-controlled study conducted by Smigielski and colleagues6 further supports the claim of synergy between meditation and psychedelics. It shows that they have bidirectional benefits: meditation can enhance the positive effects of psychedelics, and vice versa. Following a matched-subjects design, 39 healthy expert meditators participating in a 5-day mindfulness-based meditation retreat were either given psilocybin or a placebo. The researchers then compared the effects of meditation alone and meditation with psilocybin on several outcomes.

Notably, they found that psilocybin acutely increased meditation depth compared to the placebo group. Thus, experienced meditators were more able to remain engaged with their usual practice under the influence of psilocybin. The psilocybin group also showed higher levels of dispositional mindfulness one day after the retreat, reflecting an increased tendency to be mindful in everyday life.

Smigielski et al. took their experiment even further by comparing the psilocybin group’s scores on the 5-dimensional Altered States of Consciousness Rating Scale (11 5D-ASC) to those of healthy, non-meditating participants from another psilocybin study. The expert meditators showed higher scores on spiritual experience, blissful state, and feelings of unity, which are subscales indicating peak experiences. Intriguingly, they also scored lower on loss of cognitive control and anxiety. This suggests that consistent mindfulness practice may buffer against the more negative aspects of psychedelic experiences while enhancing their more positive and profound effects. 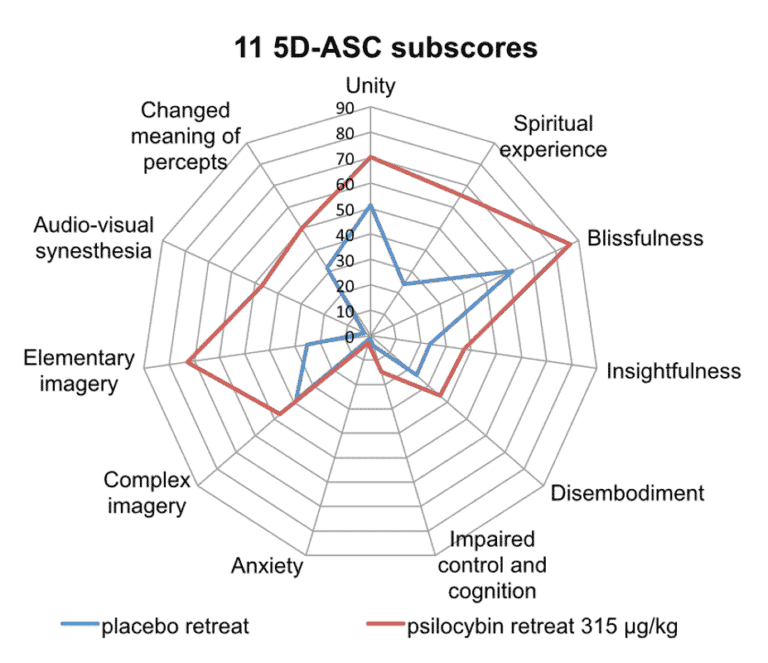 Mindfulness practice as an integration tool

Above and beyond these findings, mindfulness may be framed as a valuable tool that helps patients, or any user of psychedelics, to integrate an experience. Integration tools comprise any practices that allow people to incorporate insights from a psychedelic experience into their everyday life. For patients in psychedelic-assisted therapy, this also includes sustaining any symptom reductions in the long term. Common integration practices usually include artistic activities or conversations after a psychedelic session, which help patients to remember, discuss, and understand the experience through creative expression. However, the use of mindfulness practice for integration does not need to be confined to after a session, but may be helpful at all stages of psychedelic-assisted therapy: before, during and afterwards.

Practicing mindfulness consistently before a session has several benefits which become apparent when one embarks on a psychedelic experience. To start, it may buffer against anxiety and loss of cognitive control during the experience.6 Even in the case of more challenging experiences, meditators seem to be better equipped to confront difficult thoughts, memories and emotions: Consistent mindfulness meditation enables individuals to adopt an accepting and relaxed attitude towards emerging cognitive and emotional content.5 Lastly, mindfulness meditation before taking psychedelics may increase the likelihood of peak experiences, which significantly moderate treatment success.6,9

Individuals with a meditation practice often develop a relationship to a certain mantra or object of meditation.10 Such an object or mantra could be utilized to prime an individual during the experience. Directing a person’s attention towards their practice in this way may further prompt peak experiences or other psycho-spiritual insights. Adding to this, acutely bringing awareness to and slowing down the breath may increase relaxation and comfort and reduce feelings of anxiety.11 In fact, relaxation practices and inwardly directed attention are meditative elements that are already incorporated in psilocybin-assisted therapy trials.12

After a psychedelic experience, the effects of mindfulness practice may help patients sustain treatment outcomes in the long-term. Psychedelics can alter the content of a person’s thoughts and destabilize negative belief systems.5 However, if a patient does not develop new healthy belief systems after the session, they are more likely to relapse eventually. Engaging in a continuous practice of non-judgmental awareness may make negative beliefs and thought patterns less compulsive. It may also ensure continuous, healthy mental strategies for coping with unhealthy thoughts. This theoretical idea is supported by the success of mindfulness-based stress reduction (MBSR), which employs mindfulness practice to prevent relapse in addiction and depression.13,14 In sum, mindfulness practice could be invaluable for sustaining the positive outcomes of psychedelic-assisted therapy.

In conclusion, mindfulness practice and psychedelic-assisted therapy make a symbiotic match. They have complementary effects on the psychological and biological deficiencies associated with depression and may be stronger together than either alone. They also benefit each other: psychedelic experiences can deepen one’s meditation practice, and meditation can prepare people for getting the most out of psychedelic experiences. There is strong theoretical ground to argue for using mindfulness practice as an integration tool before, during, and after psychedelic sessions, which calls for empirical verification with rigorous clinical trials. When all is said and done, consistent mindfulness practice warmly offers a path to anyone who suffers from the tormenting tenacity of one’s own mind: The mind can become a friend for those who learn to control it.

If you’d like to be one step closer to research on mindfulness practice and psychedelics and already have a consistent meditation practice, consider participating in the “Ways of Looking” online survey by the University College London.